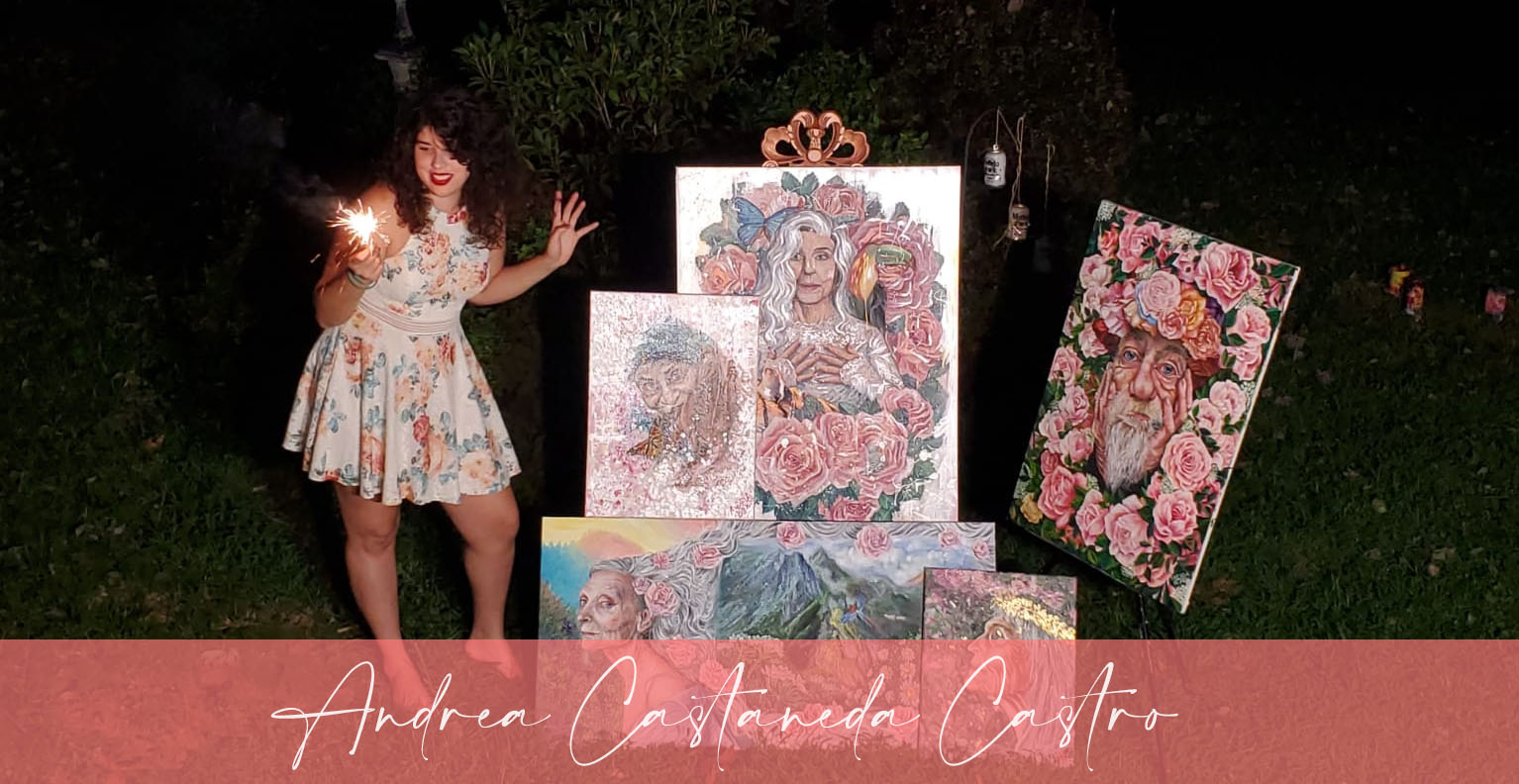 Andrea was born in Tegucigalpa, Honduras and her beginnings as an artist were from a very young age, like any girl she played with dolls and stuffed animals. But, she also always had colored pencils and drawing paper by her side. Her parents always supported her art career from a young age and she made her very first mural at the age of 13 for the Royal Kids of America San Pedro Sula School and her first job as an illustrator in Calderon Publicidad company. However, there were some bumps along the road, when she started high school she became the subject of bullying, but she used this negative energy to help grow her talent. When her classmates bothered her, she took refuge in her drawings. She built her world of colors and that helped her to cope with the difficult time she was going through.

When she went to high school she was enrolled in swimming and karate classes. She did not like Karate classes that much but, perhaps she thought that by learning a martial art she could defend herself from her classmates. Karate is a discipline in which you learn respect for yourself and for others, so although she became a good fighter, she did not use her physical advantage against the bullies to defend herself, on the contrary, her discipline taught her to maintain control.

Andrea did not have an easy adolescence, her parents divorced and then suddenly her mother received a job opportunity in Mexico, so the whole family moved there. At the age of 15 she remembers her father Piedesign as her mentor from a distance. However, coming to Mexico proved go be a great challenge, the bullying increased because of her Honduran accent and

the fact she was a foreigner, but even so she continued painting. 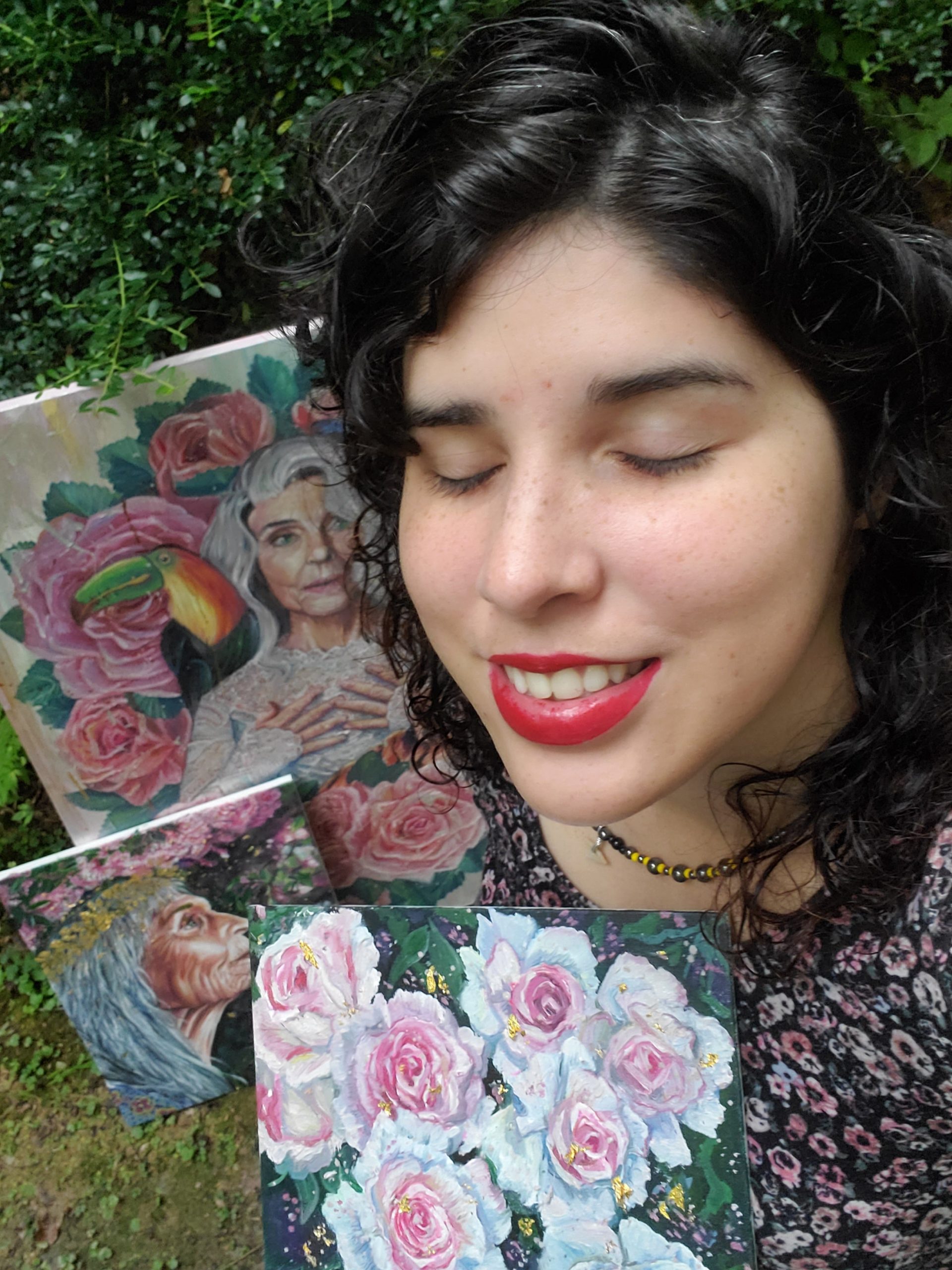 Andrea sold her first painting at the age of 15, then she followed her passion for comics and did some professional ones with her sister. known as MK Joe who is a professional illustrator. Andrea then continued her art career studying at Savannah College of Art & Design where she studied illustration for a year. She continued studying graphic design when she returned to Mexico and at the same time worked as an illustrator for several foreign companies, illustrating children’s e-books and participating in comic creation contests with her sister.

After Mexico, Andrea traveled back to Honduras in order to sort out her documents to go and study in Italy. She wanted to be a painter there and experience something new in a new country. The process became complicated as Honduras had political problems and so she stayed longer there and she was suggested by her mother to travel to Roatan island, a short boat ride away from the honduran coast. Here is where she decided to have a sabbatical year and travel during 2018. Living on this island is something that she will always remember as her beginnings as a muralist.

One day she decided to put her easel on the street in the West End of the Island and started painting in front of many people so they would know who she was. Then, a small restaurant called ‘Off the Hook’ hired her to paint murals, signs, artistic paintings on wood, tables and countless things. They gave her the opportunity to transform their restaurant into an art gallery.

After the word spread, a lot of places began hiring her, different restaurants, bars, Dive shops and more to paint them beautiful murals to brighten up their place. As her amount of work grew the people from the island recognized her as an artist and her works were listed, the population of the island recognized me as “Andrea the Artist”. She remembers that she felt very proud when her mother, father and nana, on different dates, came to visit her to the island. She also worked with a famous artist from Honduras named Brion James and his band The Scallywags

She painted several times live while they played music. It was one of the best experiences of her life combining music and art.

Since then, she has continued her art career as a muralist in Mexico and now, in the United States. Sharing her success with her boyfriend with whom she went to the United States with. Being in the US has allowed her to present her art in galleries in Washington DC, murals, local competitions and she has learned the art of body painting. She has been studying painting techniques on her own and improving her artistic portfolio. Thanks to her dedication and work, she has been able to exhibit her paintings to different galleries. This has given her the opportunity to also present her pieces in different countries such as; Argentina, Spain, USA and Honduras. . Now she is sponsored as an artist by Eco Workers, a Mexican company and she launched two stores where she will sell some specific items and prints.

She is building an Honduran online art gallery with the famous artist Keyla Morel, MC Gallery  that will be featuring Honduran artists, selling original and art prints. they will be marketing their products by social media and soon opening a youtube channel talking about the artists and giving art tips and more. Now she is part of many art groups such as Milan art club institute, AHAP Honduran artist Organization and Sacred art productions. 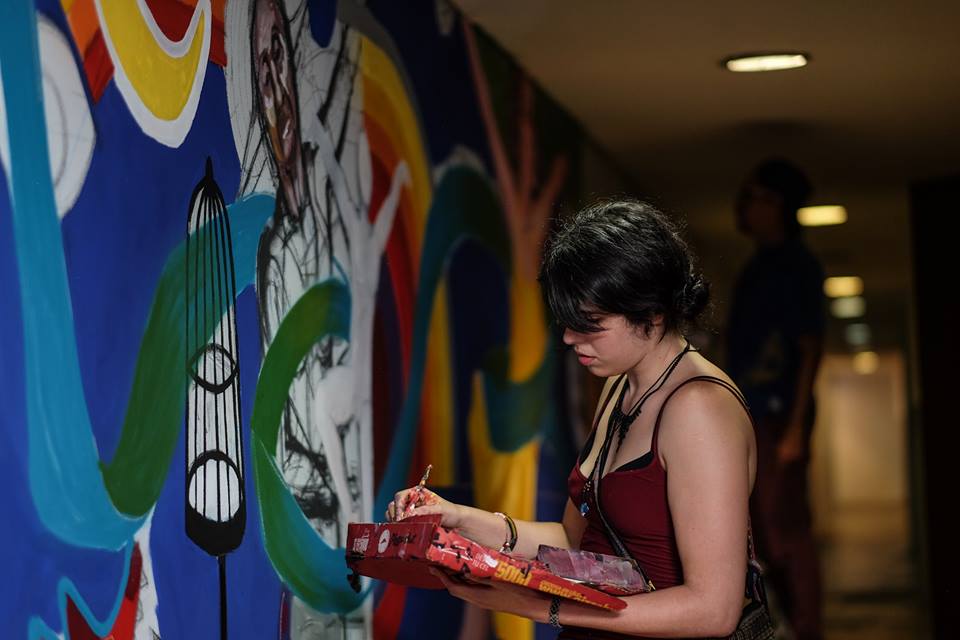 Andrea  likes to paint senior citizens because of their wisdom, compassion and love. Given their experience in life, they have managed to establish better priorities, they are people from whom you can ask for advice, they are very patient, tolerant and merciful. she characterizes herself as being a sensitive person and like any artist our feelings are on the surface. Having grown up surrounded by the love of her grandparents and her nanny has allowed herto identify with people of the same generation. The image that she has of her grandparentsand nanny is of hard-working people, they are people that she loves and values a lot, in their eyes she always appreciates the different emotions that transmit to her feelings of happiness,joy, sadness, pain, fear, hope, graciousness and determination. These are feelings and emotions that she always tries to capture in her paintings. Their lived experiences, the desire to cling to this life despite their ailments and so many stories that have been shared with us. For her eyes, through her paintings show how to make a tribute to their courage and strength.

When she paints animals with the elderly, she feels that she has achieve a perfect harmony in a painting because animals have a pure, innocent look without malice and I also see the same pure look in the elders. She often adds many flowers and nature to complete that communion, the flowers, they are beautiful and with their happy colors. She wants to convey that same joy to those who can appreciate her paintings. Since she is a naturally happy person, by adding flowers she wants to transmit that part of her personality through her work to the audience. 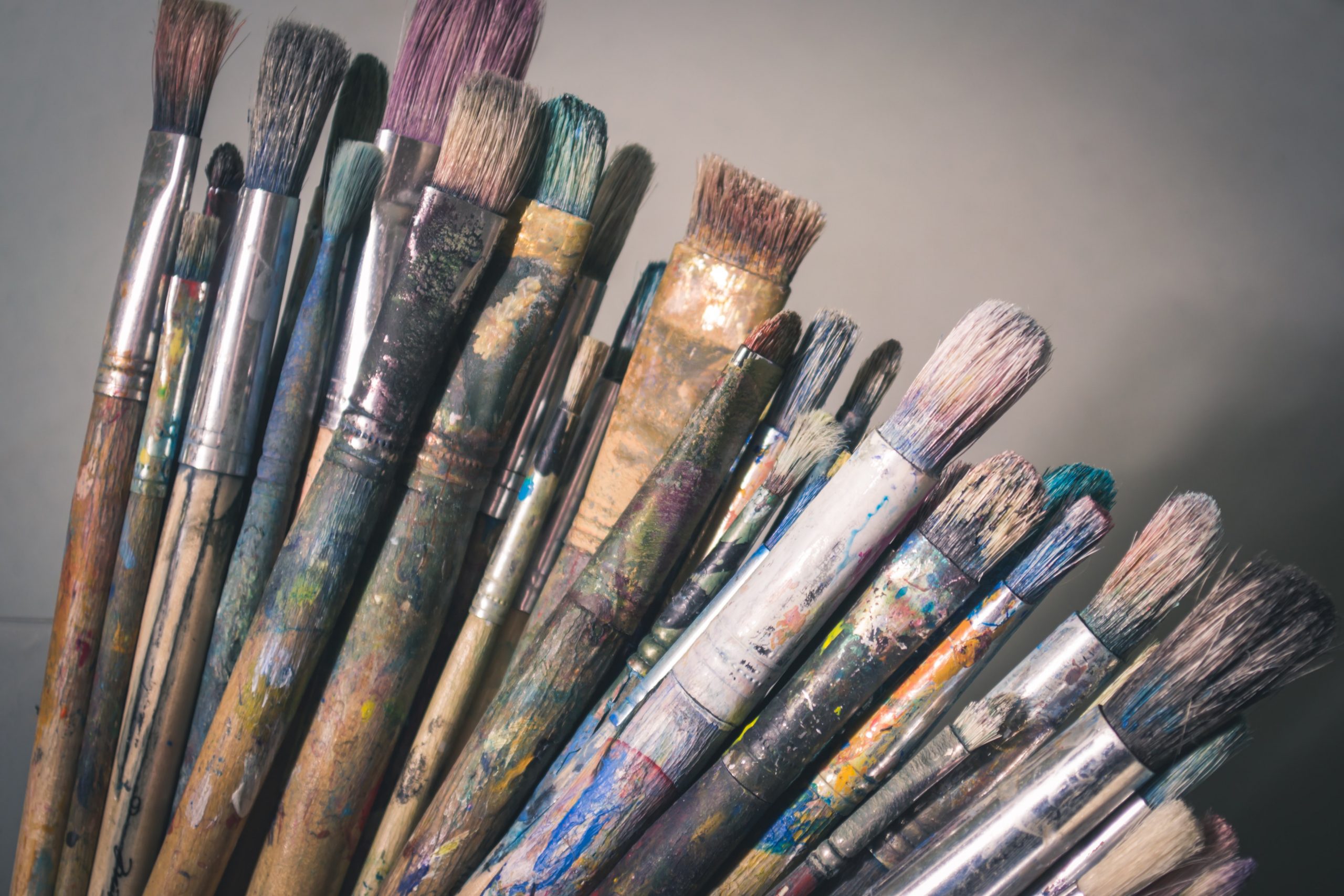 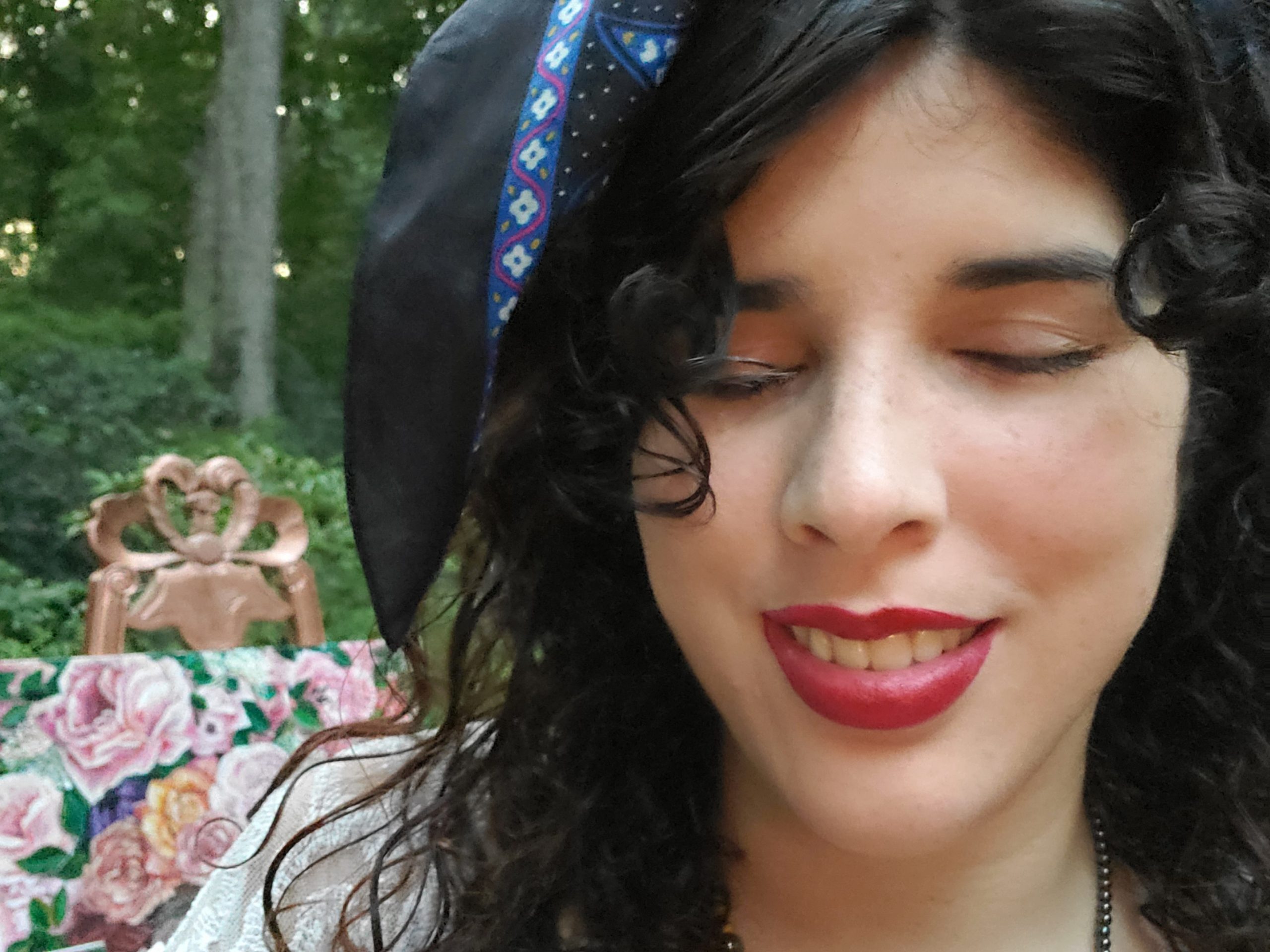